Halifax & Sydney, NS â€“ Community and labour organizations across Nova Scotia are calling for actions against Nova Scotia Powerâ€™s proposed 6% rate increases and for democratic, public ownership of the electrical utility.
Actions are planned for both Halifax and Sydney on June 7th.

Emera, the company which owns Nova Scotia Power, will hold its Annual General Meeting on June 7th in Halifax.Â  Individuals outside of Sydney and Halifax are encouraged to hold their own actions in their communities against this private, for-profit monopoly.

Halifax
Thursday, June 7th at 2:00 pm
Near the Halifax ferry terminal
Both actions will include a sing-a-long of the youtube hit â€œEmeraâ€™s Profiteersâ€

â€œNova Scotia Powerâ€™s rate increases will hurt families in our community, especially those with low or moderate incomes. No rate hikes to pay for corporate profits,â€ says Evan Coole, a member of Cape Breton ACORN.
â€œNova Scotia Power made $121 million in profits in 2010, while paying their executives millions. With democratic public ownership, that money would stay here in Nova Scotia and be used for public priorities, like hospitals, schools and roads,â€ says Kyle Buott, President of the Halifax-Dartmouth & District Labour Council.
â€œNova Scotia Power has been dragging its feet when it comes to investing in green energy and green jobs, while lobbying politicians to reduce environmental standards.Â  Public ownership will make green energy a priority,â€ says Brian Crouse, a member of Solidarity Halifax.
â€œWe are opposed to rate hikes to pay for corporate profits and executive compensation packages. Electricity should be a public right, not a private, for-profit monopoly,â€ says Suzanne McNeil, President of the Cape Breton District Labour Council. 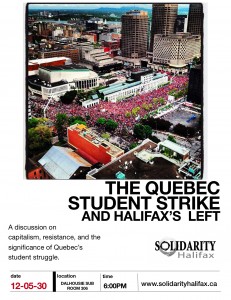 The actions will coincide with Emeraâ€™s Annual General Meeting.

Solidarity Halifax members and community allies will do a mass sing-a-long of Emeraâ€™s Profiteers (now at almost 2000 views on Youtube). Participants are encouraged to dress up like pirates – corporate pirates – and there will be prizes for the best costumes.

Itâ€™s all taking place down on a Halifax pier at 2:00 pm on Thursday, June 7th (near the Halifax ferry terminal).

â€œNova Scotia Power made over $120 million in profits in 2010 while paying their executives millions of dollars, then they have the nerve to demand a 6% power rate hike. Our message is clear, 20 years of a private, for-profit monopoly is enough. Itâ€™s time to return Nova Scotia Power to democratic, public ownership,â€ says Brian Crouse, a member of the Power to the People! Campaign.

Solidarity Halifax invites members of the public to participate in the mass sing-a-long and costume contest.

Nova Scotia Power was privatized in 1992 for less than it was worth. Since then, NSP has made more than $2 billion in profits while increasing power rates six times in the last ten years. This will be the seventh and eighth increase since 2002. Earlier this month Nova Scotia Power announced a proposed rate hike increase of 6% over two years. The case goes to the Utility and Review Board on September 13.