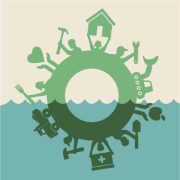 It’s been one year since Occupy Wall Street (OWS) dramatically shifted the conversation about wealth, inequality, capitalism and the fate of the public sphere, and the movement is far from dead.

Based on a recent research trip to New York, Max Haiven (a co-director of the Radical Imagination Project) will talk about two initiatives in particular. (1) The OWS-led anti-debt campaign, including the “Rolling Jubilee” which raises money to buy up individuals’ “distressed” medical debt for pennies on the dollar and “forgive” it. (2) The emergence of #OccupySandy, which saw OWS organizers take a leading role in developing an extremely effective grassroots mutual-aid initiatives to get hurricane relief to some of New York’s hardest hit (and poorest) neighbourhoods.

This will be a 45 minute presentation, followed by a questions and discussion.

Max Haiven is a teacher, writer and activist based in Halifax. He is active in education and labour struggles and has worked as a union and a student organizer.