Halifax, NS – Solidarity Halifax’s Name Our Oval contest is in full swing! Dozens of nominations were received, and voting for a new name opens this Saturday February 23. We’ll be kicking off the voting period with a launch at the Oval at 1 PM on Saturday, where you can vote in person and chat about the contest. Folks can also vote online and see full contest details at www.solidarityhalifax.ca/power.

Emera/Nova Scotia Power has made more than $2 billion in profits on the backs of Nova Scotians since it was privatized in 1992. This exploitive corporation doesn’t deserve to have a public facility name after them.

Residents of HRM can vote for one of the following names – whichever they believe deserves recognition more than the power corporation!

Short histories of each nominee are available on our website at: http://solidarityhalifax.ca/campaigns/power/nameouroval/

“HRM Council decided to give away the naming rights to Emera/Nova Scotia Power in a closed door session – Solidarity Halifax is going to conduct the vote that residents should have had,” says Brian Crouse, a member of Solidarity Halifax.

“We call on Mayor Mike Savage to show leadership and initiate a process to Name Our Oval. We also call on the provincial government to solve the problem of private, for-profit electricity by returning Nova Scotia Power to democratic, public ownership,” says Crouse.

“We’re very excited to see the results of the vote on March 9th,” Crouse concludes.

In December 2011, with very little public debate or discussion, Halifax Regional Council voted to let Emera, owners of Nova Scotia Power and one of the biggest corporate bullies in the province, name the Oval. True to form, Emera named the Oval after themselves.

The skating oval was built with millions of public dollars, but for a measly $50,000 a year, Emera gets to name the Oval for a decade.

Our city belongs to the people who live here – not to corporations and developers. Naming the Oval is an opportunity that could reflect and celebrate local history and the people who actually live here. If city council won’t do this, we’ll have to do it ourselves.

Information on the nominations, a place to vote online, and more details on the contest can be found at http://solidarityhalifax.ca/campaigns/power/nameouroval/

We call on the new Mayor of HRM, Mike Savage, to right the mistakes of previous HRM Councils and work to rename the Oval.  We also call on the Province of Nova Scotia to return Nova Scotia Power to democratic, public ownership immediately.

Power to the People!

Solidarity Halifax is an anti-capitalist organization in the Halifax Regional Municipality. We believe that there is an alterative to capitalism and that another world is possible.  One of our campaigns is called Power to the People, which seeks to return Nova Scotia Power to democratic, public ownership. 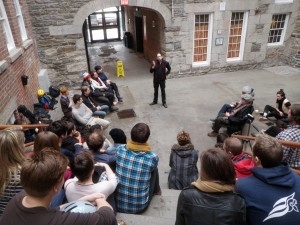 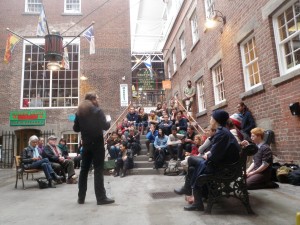 Guest speaker Max Haiven discusses The Struggle for the Soul of Education in the temporarily re-appropriated Brewery Market.

Interest in Solidarity Halifax’s Name Our Oval Contest has also spurred some to question: why bother?
Here’s why:

Renaming Our Oval: What’s In A Name?

Check out these interviews with Brian Crouse, spokesperson for Solidarity Halifax’s Power to the People Campaign, on reasons why the Oval deserves a better name:

Read also this blog post by Solidarity Halifax member Chris Parsons on the importance of re-naming, re-mapping and re-imagining the oval and the city:

The Oval, Money and Maps