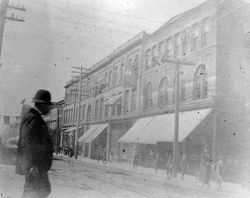 “The Roy [Building], without a doubt, will be the jewel in the crown in Halifax’s Historic Downtown,” “Residents’ entitlements will include world-class hotel style amenities, executive concierge, porter services and cutting edge security. The Roy, with its forever protected views, unparalleled height and center ice location, will reign as the landmark address to call home in Halifax.”

And there you have it my fellow Haligonians, the future home of our city’s wealthy elite. ‘High-end living’ for what councillor Waye Mason calls a new ‘niche’ of downtown residents who are apparently eager to dole out cash from their fat wallets to our starving urban core.

But let’s pause here to ask ourselves:

When will our city stop scrounging to collect pennies from the ‘trickle-down’ droppings of the super-rich?

I would like to remind councillor Mason and his associates in city hall that this new ‘niche’ of high-end residents to which he is referring already has a name and that is the 1%.  We already built them a convention center and now we’re giving them our downtown as a package deal.

Councillor Mason goes on to praise the new development as ‘progress’ on the original Roy building where the bricks were ‘falling off of it’, implying that it’s in need of repair — some repair it must be if it requires adding on 15 stories!

This re-development of the Roy building represents a decision made by our city council on behalf of all of us who live here. They have decided that Halifax’s downtown is better suited as a playground for the rich than as a place for community organizations to flourish.

City council undermines its own authority and the will of the people who it represents when it ignores its own decisions by exempting this and other new developments from the ‘HRM by Design’ rules.

By allowing developers like the Roy Building’s Reznick or the convention center’s Ramia to openly flaunt the rules set out by city council on height restrictions, and in permitting important community groups to be priced-out of the downtown, our representatives have chosen the wealthy over the poor in what has become yet another example of gentrification.

Luckily, residents are refusing to permit developers a monopoly on space in this city. The case of St. Pat’s-Alexandra school is a good example of what can happen when communities get together to reclaim a piece of their neighborhood from the grasp of developers. We need more examples like this if we are to avoid the fate that has befallen too many buildings in our downtown core. Once designed on a human scale they now act as fig leafs for the unrestricted towers of the wealthy.

We can do better than this as a city, we owe it to ourselves.