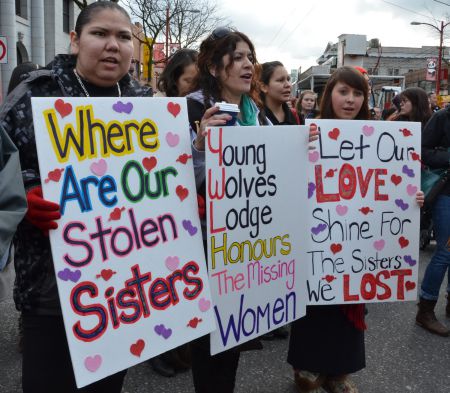 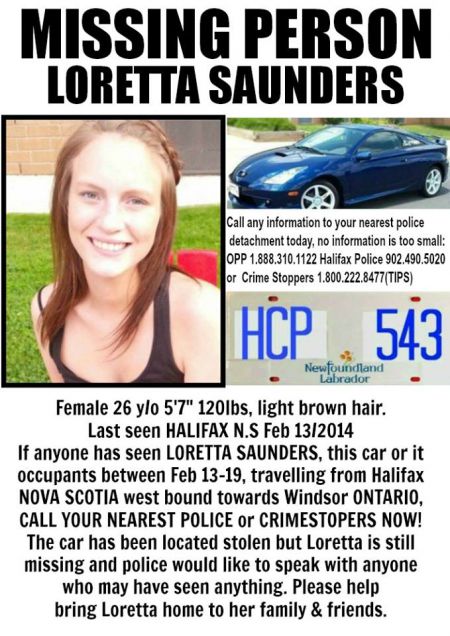 Anyone who has information on Loretta’s whereabouts, or saw this car and its occupants between February 13 and 19, are asked to call police.

K’JIPUKTUK (Halifax) – On February 13, The Native Women’s Association of Canada (NWAC) delivered over 23,000 signatures to the House of Commons in support of NWAC’s call for a National Public Inquiry into the more than 600 missing and murdered Aboriginal women and girls in Canada.

February 13 was also the day Loretta Saunders, a twenty-six year old  Inuk woman from Labrador, was last seen in Halifax.

Cheryl Maloney, president of the Nova Scotia Native Women’s Association, has been helping to coordinate volunteers for Loretta’s search in Halifax. On Friday, she had planned to be at the Liberal Party’s convention to lobby Justin Trudeau to join the call for an inquiry into missing and murdered Aboriginal women.  Instead, she was in Halifax “supporting the family and putting up posters,” of yet another missing Indigenous woman, finding herself in the middle of something that is hitting way too close to home.

“We know statistics are greater for us,” says Maloney. “Whether we’re a Masters student or not; the statistics are there. It could happen, and it’s more likely to happen to an Aboriginal person.”

SACP reports that almost 59 per cent of missing women and girls in Saskatchewan are of Aboriginal ancestry.

“Her thesis topic is very close to her heart,” says Delilah Terriak, Loretta’s sister.  “It’s a topic that she feels very passionate about; it is an example of many of the injustices towards Indigenous women and Indigenous people.”

In a NWAC fact sheet entitled Root Causes of Violence Against Aboriginal Women and the Impact of Colonization, the organization outlines some of the reasons for the disproportionate violence, such as the ongoing legacy of residential schools and systematic racism in Canada.

“Loretta is a firm believer in the necessity for decolonization and for breaking the cycle that keeps Indigenous people trapped in a life of addiction and abuse and self-destructive behavior,” says Terriak.

Loretta herself is breaking that cycle, according to her sister. “She came out of a tough place, and she is on her way to law school,” says Terriak.

Maloney, who was interviewed by Loretta for her thesis research, has been buoyed by the outpouring of support to find her in Halifax – everything from donated photocopies for postering the city, to a donated headquarter space, to funds raised to fly Loretta’s family to the city.

“It is really beautiful for me to witness this,” says Maloney.  “When I work with missing and murdered women, and poverty, and child welfare, you don’t get to see the good things very often.”

Everyone is hoping that there is more good news to come.