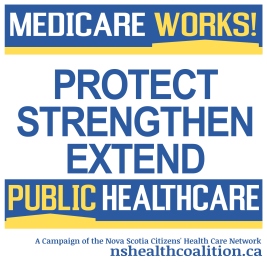 Marie Brymer is 74 years old and has been waiting for over two years to see a neurosurgeon for an assessment.

In January 2012, Marie suffered a fall in her Guysborough home. The fall caused severe neurological pain, which she describes as a constant jabbing pain.

Since then, she has had five more falls, but still has no word on if and when she will need surgery. While she has been prescribed some medication, she has still lives with the pain — and uncertainty.

Unfortunately, Marie’s case is not unique. Countless others are waiting for treatment, or going without care — if they can’t afford services that are not covered.

In Nova Scotia, over 2,500 people are waiting for beds in long-term care facilities, and home care is drastically underfunded. It’s clear that our loved ones are not getting the care they need.

Our health care system stands at a crossroads. Medicare — our universal public health-care system — was created over 50 years ago. At the time, the federal government played a strong role in establishing and supporting our most cherished social program. The federal government then funded 50 per cent of the cost of shared-cost health care. Over the years it used its oversight to ensure that all provinces provided care that was universal, portable, publicly administered, comprehensive and accessible.

Now 50 years later, we are witnessing the decay of medicare. Federal funding has shrunk to 20 per cent of health care costs, and it will soon begin to fall even lower, leaving the provinces to pick up the tab.

Shortly after coming to power, the federal Conservatives gave up monitoring the performance of provincial and territorial health systems, and stopped enforcing the Canada Health Act — opening the door to increased privatization.

Today, March 31, marks the expiry of the 2004 health accord. The health accord is the deal that sets funding and health-care service delivery agreements between the federal, provincial and territorial governments.

Past accords set valuable benchmarks for progress and created incentives to reduce wait times in specified priority services. For the first few years after the 2004 accord, we saw significant improvements in wait times to priority areas.

The federal Conservative government has unilaterally refused to meet with the premiers to negotiate a new health accord. Without one, there will be no national goals for improvement, or even standards to make sure patients receive the same quality of care in Halifax as the do in Calgary or Vancouver.

It will fragment medicare into 14 very different and unequal systems; access to essential care will depend on where you live.

At the same time, the Conservatives have turned their back on patients and those in need.

They have changed the Interim Federal Health Program so that refugees are no longer eligible for health care. Pregnant mothers, children, and cancer patients, among others, can now be denied treatment.

Fortunately, several provinces have demonstrated that they are not nearly as heartless, and have picked up the tab for providing care to our most vulnerable. The Conservatives have also jettisoned the cost of health care for long-term care beds for veterans, and RCMP health benefits.

Not satisfied with offloading responsibilities and costs to the provinces and territories, the Conservatives are about to start bleeding them dry.

Prime Minister Stephen Harper has announced an elimination of an equalizing factor (based on the different values of provincial taxing capacities) from the cash value of the Canada Health Transfer. Federal health cash funding will move to a per capita basis — it will fund health care based on population, instead of need.

Provinces like Alberta, with a large young population, will receive the lion’s share of funding — $1 billion more by 2024. Nova Scotia, with less than a million inhabitants, an older population and high rates of chronic disease, will see a major loss of funding.

The total loss in funding to Nova Scotia will be $902 million over the next decade. Put in perspective, that’s equivalent to 1,319 nursing jobs over 10 years, over 10 per cent of the province’s entire nursing staff.

Perhaps even more important than the loss in funding, the lack of a new health accord undermines the ability to address the serious shortcomings in medicare.

We know we should be prepared now to assist our elders in aging with dignity, yet there is no national strategy to make sure our seniors are getting the care they need.

Furthermore, Canada is the only developed country with universal public health care that does not cover medicines. Our patchwork of work and private insurer programs leaves 24 per cent of Canadians without pharmaceutical coverage.

We know that when people cannot afford drugs, they go without, even to the detriment of their own health and at greater cost to the health-care system. In fact, 10 per cent of Canadians currently do not adhere to their prescriptions because of cost.

Today, thousands across the country are standing up to protect medicare. Forty three communities from coast to coast are taking part in a national day of action to launch a campaign for a new health accord.

Health workers, patients, families and advocates are sounding the alarm that public health care is under attack. Together, we are calling on our premiers to stand up to Harper and to stand up for medicare.

We need a new comprehensive health accord to provide stable and just funding and to expand the scope of public health care. It’s time to demand that the government live up to its responsibilities and meet the needs of all its citizens.