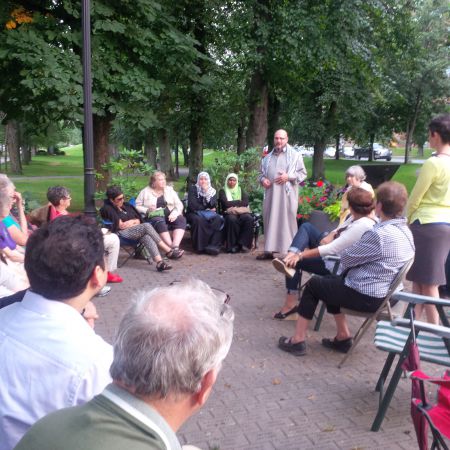 On the second last day of Ramadan, about thirty Muslims, Jews and their friends gathered in Victoria Park an hour before nightfall to break the fast.

Traditionally, Muslims break the daily fast during Ramadan with a meal called Iftar.  Iftar is held right after evening prayers.  In this case, Muslim participants first prayed, and then with Jewish and non-Jewish friends ate dates and sweet cakes and drank water to symbolize the breaking of the fast.

The Halifax chapter of Independent Jewish Voices – Canada organized the respectful event to promote discussion and  create friendship in the midst of horrifying events in Gaza and the West Bank in the last couple of weeks.  In informal talks, people in the rather tranquil park setting shared information from reliable newspapers, and online sources.  In addition some participants spoke of their relatives in Gaza – whom they cannot now locate — who were forced to flee their homes to dodge the shells and bombs raining down on Gaza.  To date:

However the tide is turning. People all over the world are telling Israel – and the United States – to stop bombing Gaza, and to stop the illegal blockade, the illegal arrests.  Israel wants to grab the Palestine people’s land,  but after 47 years, the Palestinians continue to fight.  As one person at last night’s gathering in Halifax said, “Everything in today’s world is made in China; but courage is made in Gaza.”

One Response to “Discussing Israel’s airstrikes and killings in Gaza: breaking the fast with Muslims, Jews and their friends”