By Judy Haiven, professor in the Management department of the Sobey School of Business – Saint Mary’s University. She is chair of the Canadian Centre for Policy Alternatives-NS and a member of Solidarity Halifax. 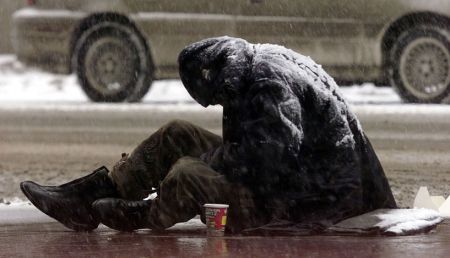 I cringed when I heard Michael Enright’s introduction to the Sunday Edition today (CBC-Radio One).  I cringed because I heard similar arguments 33 years ago when food banks first opened in Canada.  The idea was to help the poor by giving them either what we middle class people could afford to part with in our kitchen cupboards, or buying an extra tin or two of beans, tomatoes, or a jar of peanut butter, or a bag of pasta and leaving the groceries in the supermarket’s designated bin for the food bank.

Giving to the food banks makes us feel good. It makes the CBC feel good. For the last several years, the CBC in Halifax has raised thousands of dollars and tons of food for the food banks through art auctions and collections during the Christmas season.  Today the idea of socks is catching the media’s attention.  Enright and others who can easily afford the few dollars to buy extra pairs of socks feel good about handing them out to charities or directly  to people on the streets.

Both these practices — donating to the food bank or giving out socks — are similar: they make the giver feel good, while ensuring the giver does not have to directly give the poor person money and worry that it will be ‘misspent’ on alcohol, drugs or cigarettes.

How nice of us!  We give the poor our castoff and mostly boring tinned food because they don’t deserve to eat the nice food we eat (except for the special Christmas dinners at the shelters  or church basements). And we give the poor socks, (Chinese-made in factories that pay workers pennies an hour) because socks are essential cushions and feetwarmers for the feet of poor people who must trudge kilometres, from the shelter breakfast to the drop-in centre to the church basement, in search of three meals each day.

Somehow we in the middle class know what’s right for the poor – banged up tins and instant noodle soup packets or socks to help them live on the streets or shelters in winter.

But the middle class seldom calls for an increase in welfare, a guaranteed annual income or permanent housing for the homeless or the poor. I wonder how many times Mr Enright has attended a protest or action by anti-poverty activists to demand housing for the homeless?  How many times has he written letters to the editor or the premier about the situation? When has he spoken publicly in favour of a guaranteed annual income?

Poverty and homelessness are not any one person’s fault. They are the fault of a society based on greed, debt and desire to punish the ‘have-nots’, and give tax breaks to the ‘haves’.

I’m one of the ‘haves’.  I say enough. I want to pay higher taxes so others can eat, rent an apartment and have a guaranteed decent annual income.   Buying socks and extra packages of pasta will never make the changes we need as a society.  But speaking out, demonstrating and holding our provincial and federal politicians accountable could help.

Presently, Nova Scotia taxpayers are footing the bill for projects such as a new Halifax convention centre ($160 million), and a bailout for 93 mink farmers ($9 million).  The NS government has just issued  a payroll tax rebate for Lockheed Martin ($6.5 million over 7 years). That works out to the McNeil government subsidising Lockheed-Martin $4,642.86 per employee — which is 10% more than what a single people on welfare is given to live on every year (after their housing allowance is paid).

I think that $175 million could go a long way to build affordable housing for the homeless and the poor – it’s a start.