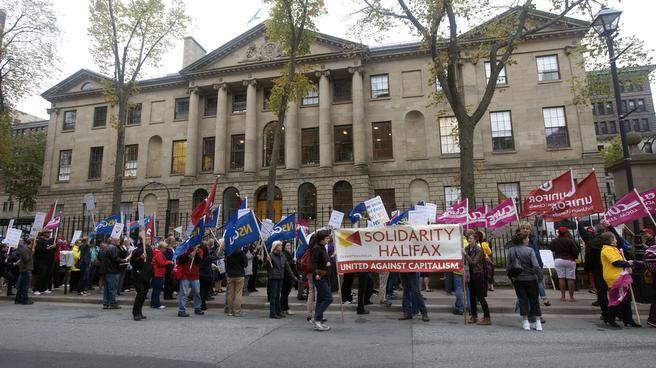 The Radical Imagination Project and Solidarity Halifax are pleased to invite you to a conversation about the recent Greek elections.

5:30-6:30 – discussion with a grassroots organizer and scholar from Greece
6:30-7:30 – a discussion of the implications for Halifax, Nova Scotia and Canada.

The election of the left-wing Syriza party in Greece last month has been hailed by many as one of the greatest recent challenges to the austerity agenda and a victory for Greece’s grassroots radical organizers. But what is the situation on the ground? What potentials and perils does the new government face? What is the scope of their political agenda and ambitions? What is their relationship to the autonomous grassroots movements in Greece (social centres, solidarity clinics, occupied factories, anti-privatization efforts, and more)? What lessons can we learn for our own struggles in Canada, and in Halifax?

Join us for a conversation with Theodoros Karyotis via teleconference, followed by a conversation about the implications for Halifax, Nova Scotia and Canada.

Theodoros Karyotis is a sociologist, translator and activist participating in social movements that promote self-management, solidarity economy and defense of the commons. A member of the Initiative of Solidarity with the Vio.Me. self-managed Factory, (viome.org]) and the Initiative 136 for social control of Thessaloniki’s water services (136.gr). He helps organize the annual Direct Democracy Festival, an international event that brings together collectives, activists and academics around the issue of constructing radical alternatives to capitalism from below. He blogs at autonomias.net.

Bill 1 protest outside the provincial legislature in Halifax, Nova Scotia

The Liberals’ election promise of restructuring healthcare in Nova Scotia has turned into a prolonged battle between the government and the province’s four healthcare unions.

The drama began last April when the Liberals introduced essential service legislation, eliminating the right to strike for nearly 40,000 healthcare workers. Strategically hobbling the unions by taking away their most powerful weapon, the Liberals then introduced Bill 1, the Health Authorities Act, in October 2014.

Under the guise of streamlining healthcare, the Liberals have been very clear in their intention of consolidating healthcare bargaining into four bargaining units (nursing, healthcare, clerical, support services) and then assigning a union to each bargaining unit. The plan tramples the rights of workers to democratically choose their union.

However, Bill 1 has brought nothing but chaos and uncertainty to Nova Scotia’s healthcare system.

Arbitration to implement Bill 1 began in early December after mediated talks between the unions and the employer failed to reach a resolution about who would represent which workers. The arbitrator, Jim Dorsey, was originally given a deadline of January 1, 2015 to issue his decision. The deadline was then extended to January 19 at which point Dorsey only delivered a partial ruling.

A second round of arbitration began in early February, to ostensibly resolve outstanding issues, particularly concerning the crucial issue of union representation.

Rather than dictating which workers would belong to which unions, Dorsey upheld the principle of majoritarian rule. He argued that union representation must be selected by a majority of the workers.

Using this framework, he decided that only one union, the NSGEU, had a clear double majority – in healthcare. However, he also stated that the NSGEU would take the clerical bargaining unit as well once a local union merger and transfer were complete.

Contradicting the tasks assigned to him by the Liberals, Dorsey argued that, “Trade unions have distinct cultures shaped by workplaces, history, their membership and leadership. A union’s membership is its main asset, but its members are not considered to be commodities to be bartered.”

Dorsey did not come down with a firm decision with regards to the other two bargaining units – support and nursing. Clearly, he regarded this decision as unfinished work. At the end of the report he states that he retains jurisdiction as Mediator-Arbitrator and intends to return to resolve the outstanding matters.

The Government and the unions react

Joan Jessome, president of the NSGEU, initially welcomed the decision as a victory for workers and a vindication of democratic values in Nova Scotia. Jessome announced that Dorsey had awarded the NSGEU both the healthcare and clerical bargaining units. She also said that the NSGEU was prepared to work with the NSNU to draft an amalgamated union structure for the nurses bargaining unit, and do the same with CUPE and Unifor for support services.

However, only a few hours later, Health Minister Leo Glavine announced he would be firing Dorsey, and even mused about whether or not he would pay Dorsey in full for his work.

Glavine denied that the NSGEU had a majority in clerical and stated that Dorsey’s report did not make a decision in regards to the other three bargaining units. Instead, he announced that the government would “finish the job” and introduce legislation before April 1 that would determine which of the unions would represent the remaining three bargaining units. Glavine explained:

“And now, as a government,” Glavine continued, “We will make it very clear who will represent who.”

If the government had fired Dorsey, he didn’t seem to get the memo. On Wednesday, February 25, Dorsey released another decision officially awarding the clerical bargaining unit to the NSGEU.

This second report caused the Liberal government stumble in their response.

Last Friday, Glavine had announced that the government would respect Dorsey’s decisions with regards to seniority, collective agreements, and classifications. They also stated that healthcare would be awarded to the NSGEU.

However, with Dorsey unexpectedly assigning the NSGEU two bargaining units, healthcare and clerical, the government was put in the awkward position of either going back on their statements or of showing their hand and revealing the true intention of Bill 1 – to assign workers into unions.

In an interview given to a scrum of reporters after Dorsey released his decision, Glavine said that, “Everything is back on the table. The Dorsey report was so inconclusive that we’re almost unfortunately at a restart on this whole area, so you know we are going to take that whole area and make a final decision.”

Lana Payne, Atlantic Regional Director of Unifor, called the government’s decision to legislate workers into unions a “dark day” for labour and workers’ rights. “We had a solution. A solution that could have achieved what the government said it wanted. The challenge is that, I guess, that’s not what they wanted. They have another goal in mind. And that’s been an attack on union and on workers in unions.”

Danny Cavanagh, President of CUPE Nova Scotia, also spoke to the mistrust that this government has created among workers in Nova Scotia. “There remains today 24,000 healthcare workers that have no idea what’s going to happen to them any more than they did six or eight months ago. So, how can anybody trust a government that one day says we’re going to abide by the arbitrator’s decision and then essentially fires him part way through? Whenever something happens that they don’t like they threatened the legislative hammer to get what it is they like.”

“This has been very difficult for everyone,” says Janet Hazelton, President of the NSNU. “I think what’s disappointing is that there’s no clear answers still. People have waited until January 1, they thought, then it got extended to the 19th, then it got extended to another week of hearings, then it’s February 20, and six weeks from now something has to happen, and we still don’t know that answers to these questions.”

Note: Articles published by Solidarity Halifax members do not necessarily reflect positions held by the organization

> Listen to the interview here