Talking Radical Radio interviews Kyle Buott. He is the president of the Halifax-Dartmouth and District Labour Council and a member of Solidarity Halifax. He talks about a recent gathering: 14 anti-austerity and anti-capitalist groups from across the country were hosted by Solidarity Halifax at a Congress of the Radical Left, to discuss building relationships and possibilities for pluralist, non-sectarian collaboration in the struggle for transformative social change.

>LISTEN TO THE INTERVIEW HERE 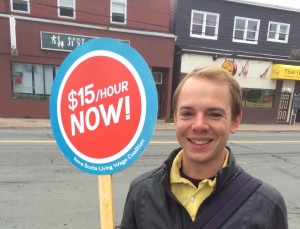 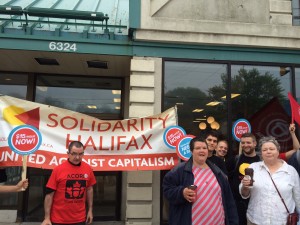 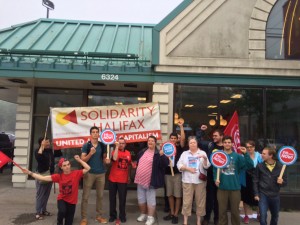 On Wednesday, students, workers, and low-income earners came together to fight for a $15 minimum wage. The Fair Wage Coaliton, made up of Solidarity Halifax, ACORN Nova Scotia, the Halifax-Dartmouth District Labor Council, the Canadian Federation of Students, and the Dalhousie Student Union held an information picket early Wednesday morning outside the McDonalds on Quinpool Road.

Want to join the fight? Check out the Nova Scotia Needs a Raise Facebook page or this fact sheet.

This article by Solidarity Halifax Member Brian Crouse and Alexandra Killham originally appeared in the July 9, 2015 edition of The Coast.

The Coast offers Halifax great event listings, horoscopes and sometimes supports important investigative journalism. But there is power in having access to thousands of readers and the ability to lift voices. Publishing Atencio’s article opened up space for people to share anger, to question Canada Day and to challenge the uncritical celebration of Canada’s history. It also showed that the Coast is a forum in which this is possible. The choice to follow up with Wood’s article, as a response, closes that space off just as quickly.

The Coast presented two articles implying that both perspectives were equal and valid. Just because there are “two sides to a story,” however, doesn’t mean that both sides need to be published. Or that they are even based in truth. An indigenous woman wrote an article challenging common perceptions of Canada Day and nationalism. She educated readers on some of the reasons that this national holiday conceals colonial violence and sidelines indigenous experience. This truth is not one that is taught in history books, featured on a Canada Day parade float, or shown on TV on July 1.

Within the dominant stories of Canada Day, Wood’s perspective is one that we hear too often. It is constantly validated and upheld. It was really important for The Coast to publish Atencio’s article—but following it with Wood’s perspective works to silence indigenous experience.

This is not an issue of freedom of speech. There is a difference between “freedom of speech” and choosing to publish an article. The right to freedom of speech simply means that you can’t be arrested for your opinions. Just because Woods has an opinion (albeit one clouded with privilege) doesn’t mean that the Coast needed to publish it.

Journalism isn’t neutral. The choices of which authors to publish, which stories to feature and which voices are heard are always political choices. Choosing to show “two sides of a story” ignores the fact that one side often has more power.

What does Canada Day look like when we actively acknowledge and honour that Canada isn’t something that everyone celebrates? Colonialism is an ongoing process, and for many, this is a lived experience, not a lesson in a history book. By publishing articles that tell these stories, we create space for conversations that challenge false and simplistic ideas of Canada. Like all media sources, the Coast’s choices in which articles to publish give it a role in the ongoing struggle for justice – whether they acknowledge it or not.

In March Egg Studios locked out 290 freelance film technicians, members of IATSE Local 849 after failing to reach a second collective agreement. Sébastien Labelle wrote a personal response originally posted on Facebook after being questioned about his support for IATSE. Sébastien is a self-employed actor and member of ACTRA. He is also VP (Culture & Mayworks) at the Halifax-Dartmouth & District Labour Council, a member of Solidarity Halifax and a former union organizer with the Service Employees International Union Local 2.

I support IATSE because I’m a trade unionist. I strongly 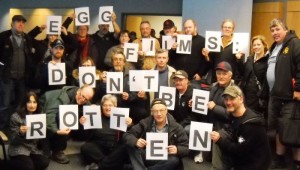 believe in the right of workers to have  representation at work and a say in determining their working conditions. Employers should not be the sole dictators of our economic circumstances, they should be obligated to consult and negotiate with the people they employ through the organizations that represent their collective interest in order to level the power imbalance between employers and employees. This is especially important in the case of freelance/contract work where workers are particularly vulnerable to the whims of employers. 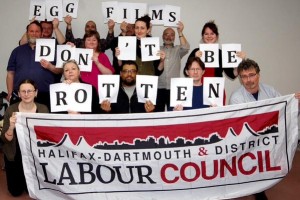 More and more, our economy is trending toward precarious contract work where job security is very low and the ability to patch up a sustainable stream of income that provides through bad circumstances and can support families is extremely difficult. IATSE, like all unions, is actively working to buck that trend to the benefit of all workers and of our economy as a whole.

Being myself a worker in an industry with very low job security (increasingly so as of this summer), it is to my benefit to assist others achieve fair and livable working conditions. If the floor and ceiling of working conditions in my industry are raised, I then can expect my own conditions to improve over time. The reverse is also true.

But more to the point in this particular case – Egg Films has a legal obligation to negotiate with IATSE 849. Whatever you might think of how it happened, the union certification (an extremely difficult process) *IS* in effect. Period. The validity of the certification has been upheld in trial after trial up to the Supreme Court of Canada (hardly a bastion of leftist politics). Pretending that the certification isn’t valid is petty and harmful. It is also dragging friends and colleagues in an industry already suffering from high stress into a prolonged unnecessary strife.

Egg Films’ suggestion that the impasse is IATSE’s fault is disingenuous. This is a lockout. The employer has locked out the contract workers from working for them. This is the employer’s decision, not the union’s. It is also up to the employer to end the lockout and return to the bargaining table.

Instead of collaboratively crafting improved working conditions for workers it employs, Egg Films (Atlantic Canada’s largest TV commercial producer, with annual revenue in the millions) has instead chosen to spend outrageous amounts of money and resources into futile legal battles and misleading PR campaigns. The fact that Egg Films is shamelessly attempting to co-opt union symbols and slogans to portray itself as the victim in a union-busting campaign is despicable.

I have no doubt that Egg Films’ full-time employees with secure positions and benefits along with pension, EI and WCB contributions are very content (I would be too!). But these are not the workers who are locked out. Those who are locked out are not in the photos peppered with smiles that Egg Films gleefully shares on FB. Those workers have to patch an income while working for numerous employers over the course of a year, every time through short term contracts that often don’t offer contributions to pensions, EI and WCB, leaving them in constant financial insecurity. As an ACTRA member, I get negotiated standards for working conditions and contributions when on contract. These workers also deserve the same ability to negotiate their own terms, and they deserve to have their union rights respected.

If employers are the motors of our economy like they claim to be, then they have a social obligation to foster an economy that will provide safe, secure and livable working conditions for all those who participate in the economy.

#NSFilmJobs isn’t good enough if people can’t make a stable living off of them. Egg Films needs to end the lock out, get back to the negotiating table and help us all lift standards in our industry.