Larry Haiven is a professor in the Department of Management at Saint Mary’s University and a member of Solidarity Halifax. This is his submission on Bill 148 at Law Amendments, on Tuesday December 16. 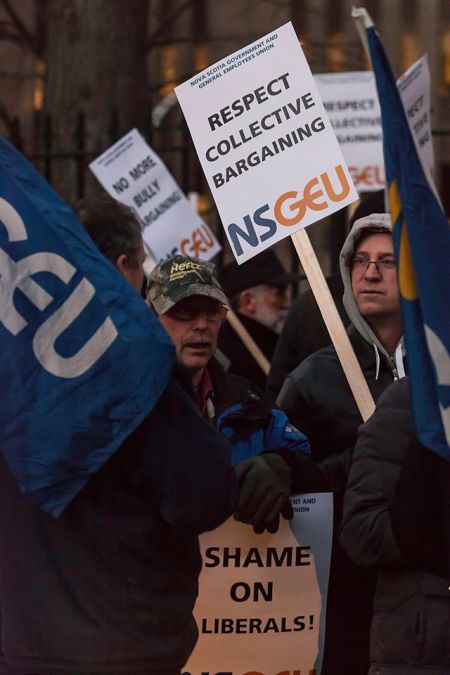 Rally against Bill 148 at the Legislature, December 16. Photo Facebook

As we contemplate Bill 148, it’s never good to ignore history, so here are a few stories to refresh your memories or enlighten you. I’ll mention only a few, but important cases:

Gordon Campbell led a Liberal government to power in 2001. Elected with a strong majority, part of his promise was to institute austerity, cut taxes, cut spending, and take on the public service unions, especially the Teachers Union.

So Campbell took on the militant teachers union and for his troubles, precipitated three strikes in ten years. One of those, in 2005, was the longest teachers strike in Cdn history. It was illegal since the government had removed the right to strike and had also passed legislation extending the collective agreement. Nonetheless, or possibly as a consequence, the teachers voted over 90% for strike action. The teachers struck for 2 weeks; they continued on strike despite court injunctions making them stop paying strike pay. The provincial labour federation had one-day general strike in support.

Contrary to predictions, public support swung to the teachers and against the government. Even children’s entertainer Raffi came out for the teachers. Nobody likes a bully

Two times the B.C. Supreme Court pronounced that the province had violated teachers’ charter rights in 2002 when it removed hundreds of clauses related to class size and class composition from the collective agreement and fobade future bargaining on those issues. The courts ordered those clauses restored retroactively.

In 2002, BC government introduced legislation with next to no consultation with health care unions. The legislation wiped ouit important provisions of collective agreements.

In 2007, the Supreme Court of Canada ruled that the BC government’s actions were a violation of the Charter and enshrined the right to collective bargaining in the Charter; it changed the face of labour law in Canada and led to further charter labour rights that I will mention presently.

In 2001, a number of health care bargaining units represented by NSGEU & NSNU entered collective bargaining. They reached agreements but those tentative agreements were rejected by the members – several times.

As the unions lay poised to strike (one unit actually went on legal strike briefly,) the Nova Scotia Conservative government passed Bill 68 making the strikes illegal AND imposing the terms of settlement on the unions. There was round-the-clock picketing outside the legislature and filibustering inside. As I recall, members of the present Liberal goverment supported the picketers. How quickly we forget!

The two unions practiced different strategies: NSGEU nurses signed letters indicating intention to quit their jobs en masse. The NSNU ran a series of killer ads on television and radio. Public opinion turned against the Conservative government; even its own supporters were furious at the government.

And, of course, I needn’t mention the fiasco earlier this year where the present Liberal government attempted to gerrymander the union representation rules for health care collective bargaining. How well did that end up?

In 1983, the Conservative government passed legislation to end all health care strikes. There were large penalties for any infractions by the unions.

In 1988, amid the Calgary Winter Olympics, the union was as good as its word as 14,000 nurses hit the frozen streets

They went on an illegal strike. The strike continued even when the courts found the union guilty of contempt of court and fined it almost ½ million dollars. Then individual members received termination notices and fines of $1000 each for civil contempt. The other unions ponied up to help pay the fines.

What’s interesting is that prior to 1983 when strikes were not illegal, the union had always allowed its members to work at certain hospitals, in order to provide a kind of steam valve.

But in 1988, so angry were the nurses that they stopped work at every hospital, including the Children’s Hospital.

The union refused to return to work until it had negotiated a settlement with which it and its members were content.

In 1999, an NDP government passed legislation to try to end a strike by nurses. The union refused to comply despite fines and other penalties. The nurses continued on strike until they reached a settlement. Not surprisingly, public support, initially hostile to the nurses, grew throughout the strike.

There were several other health care strikes in subsequent years, but the NDP government seemed to have learned its lesson. A few years later technologists went on strike and Premier Lorne Calvert had this to say:

This is not the first time health care workers have withdrawn their services, let’s not all panic here…. The vast majority of our health care agreements have come to negotiated settlements, and as a result I believe we’ve had a better work place for our health care providers.

But then the Saskatchewan Party led by Brad Wall was elected in 2007. Shortly afterward, that government introduced a law setting out a so-called “essential services” regime, where it so harshly limited the right to strike as to render it meaningless.

The unions challenged the law. It eventually wended its way up to the Supreme Court of Canada, which ruled earlier this year that the right to strike was protected under the Charter. By the way the work of Dr. Judy Haiven and myself was cited in those decisions.

This Court has long recognized the deep inequalities that structure the relationship between employers and employees, and the vulnerability of employees in this context. While strike activity itself does not guarantee that a labour dispute will be resolved in any particular manner, or that it will be resolved at all, it is the possibility of a strike which enables workers to negotiate their employment terms on a more equal footing.

The Supreme Court ruling does not say that governments can’t take away right to strike. However, they must replace it with a reasonable substitute. That substitute is binding arbitration.

Delorey’s Cromwellian dilemma is that most of those workers, from doctors to teachers to crown attorneys, engage in some form of collective bargaining. The Supreme Court of Canada says collective bargaining and the right to strike are essential to democracy, protected by the Charter of Rights and Freedoms. That means governments have to sit down and negotiate in good faith, not just pretend. And if you want to take away the right to strike, then you need to substitute something meaningful — like binding arbitration. The Liberal government doesn’t seem to want to do collective bargaining. Witness the shotgun negotiations with the teachers. And it certainly doesn’t support the right to strike. But it also doesn’t want to risk arbitration, where a third party just might agree with some of the workers’ proposals. Like many governments, it would like to suspend the whole messy business and impose a settlement by divine right in the tradition of Henry VIII.

Collective bargaining is indeed a cornerstone of our democracy, but it is that not only to inconvenience governments. It’s there to help the parties reach settlements that are not only fair and equitable but are SEEN as fair and equitable.

In conclusion, may I repeat several points, ladies and gentlemen: Nobody likes a bully. Public opinion can switch very quickly, especially when a bully is perceived. And the courts, deferential as they are to the interests of capital, value collective bargaining.