Analysis » Renaming Our Oval: What’s In A Name? 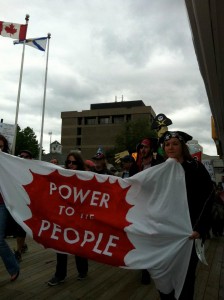 What’s in a name?

In December 2011, without any public debate or discussion, Halifax Regional Council voted to let Emera, owners of Nova Scotia Power and one of the biggest corporate bullies in the province, name the Oval.  True to form, Emera named the Oval after themselves.

The skating oval was built with millions of public dollars, but for a measly $500,000, Emera gets to name the Oval for a decade.

Solidarity Halifax is holding a contest to rename the skating Oval on the Commons. The contest will seek suggestions for a new name from the public and will hold a vote to select the winning suggestion.

We think it should be made clear:  the Oval was built for the enjoyment and use of residents of HRM.  It was not supposed to be a public relations gimmick for Emera and Nova Scotia Power.

Solidarity Halifax is undertaking this project for many reasons.   Here are four of them:

1. Naming rights – Our city belongs to the people, not to corporations and developers. Unfortunately, most of HRM’s city councilors are in the pockets of the developers.   Names of spaces in cities are forever linked to the culture of a place, and buildings and facilities in our city should be named for prominent residents or communities, not a group of corporate pirates.  Choosing a name for a prominent public fixture (such as the Oval) is an incredible opportunity to preserve a piece of local history, tell an important local story, and create a space that has meaning for the residents of this city.  Taking this chance to cultivate a sense of public history is what HRM Council should have done in the first place.

2. Details of the Deal – Emera got the right to name the staking oval, for ten years, for a mere $500,000 [1].  Outrageous.  The Oval was built and is operated with public dollars. After spending an estimated $5.7 million in capital costs to build and roughly $400,000 [2] a year to operate the Oval, all public money, HRM’s politicians gave the name rights away for next to nothing.  Now Emera gets credit for the oval, which they didn’t pay for or think of in the first place.  Why should Emera get essential free advertising every time the oval is mentioned?  Instead of giving residents a chance to pitch in, HRM Council discussed many of the details of corporate sponsorship in an in camera, (closed-door) meeting on November 22, 2011 [3].

3. Commercialization of space – Why can’t we have good, quality public infrastructure and programs without multinational corporations’ involvement?  Every time physical space is used in our neighbourhoods, it is given over to private, for-profit interests to develop.  What would development look like if it were about meeting people’s needs, not furthering corporate greed?

4. Emera…seriously? – Finally, who thought it was a good idea to name a public skating rink after one of the biggest corporate bullies in Nova Scotia?  Emera/Nova Scotia Power condemns thousands of residents of HRM to poverty, charging some of the highest electricity rates in the country.  They have dragged their heels on developing green energy, and they cut off families’ heat in the middle of winter.  And while they do all this, they pocket record profits, year after year.  Emera is a corporation that Nova Scotian’s love to hate.

This is a PR gimmick. While Nova Scotia Power brings in over $120 million a year in profits off the backs of Nova Scotians, and Emera CEO Chris Huskilson makes $2.99 million [4] a year, they throw some spare change at a recreation facility and get free advertising for ten years.

The Municipality should adopt a new policy, giving residents the right to name public facilities, either through public contests or some kind of public engagement process.  We should cancel the deal with Emera and re-name the Oval to reflect the residents of this city.  The new HRM Council has a chance to reverse this awful decision.  Mayor Mike Savage can show leadership and have the name changed.

And the province should solve another big problem – private, for-profit electricity.

Nova Scotia Power should be brought back under democratic, public ownership.  Since it was privatized in 1992, Nova Scotia Power has drained more than $2 billion out of our province in profits, rates are among the highest in the country, they cut off people’s heat in the middle of winter, and they are dragging their feet on green energy.  Emera is making profits off our power bills and more for-profit power companies, like the Liberals are proposing,  won’t help that – we need to move to democratic, public ownership.

Solidarity Halifax’s Power to the People campaign is all about making Nova Scotia Power public again.

Learn more or get involved at www.solidarityhalifax.ca/power

2 Responses to “Renaming Our Oval: What’s In A Name?”