Analysis » Support the People of Gaza: An Analysis by Solidarity Halifax 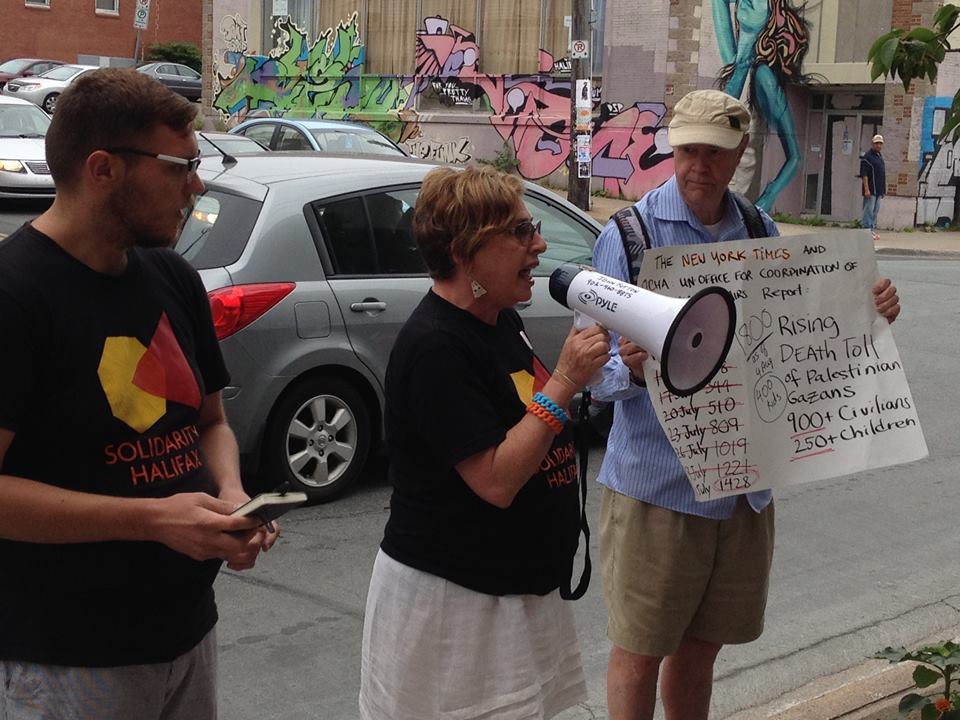 Judy Haiven, member of Solidarity Halifax and of Independent Jewish Voices, addresses the crowd assembled outside of MP Megan Leslie’s office to demand that the NDP condemn Israeli aggression.

Ever since more than 700,000 Palestinians were forced off their land in the Nakba (catastrophe) of 1948, the Palestinian people have been bravely resisting Israeli colonialism. Many of the Palestinian refugees live in sprawling camps in the Gaza Strip, keeping the keys to their old homes in the hope that one day they will exercise their right to return. 1.2 million of the 1.8 Palestinians living in Gaza, the most densely populated area of the planet, are refugees.

Following years of resistance in the Second Intifada, the state of Israel withdrew its illegal settlements from the Gaza Strip in 2005. However, the occupation remained: Israel still maintains a security perimeter inside the Gazan border that blocks farmers from the best farmland, maintains a naval blockade, controls the airspace and population registry, and along with Egypt tightly controls the flow of goods and people in the Strip, earning it the nickname of “the world’s largest open-air prison.”. For the Palestinian’s refusal to quietly disappear, Israel is enacting collective punishment on the people of Gaza.

Sine July 8th, Israel has been brutally bombing the people of Gaza. To date, more than 1500 people, most of them civilians, have been killed in the recent attack. Most media has refused to report the truth as to what is happening in the Middle East and has instead focused on the actions of Hamas. The real crime here is Israel’s collective punishment of the Palestinian people and the continued illegal occupation of Palestine. Israeli forces have knowingly fired rockets at children playing soccer on the beach, the al-Wafa hospital, Gaza’s only power plant, and even United Nations shelters. On July 19th nineteen People were killed when the Jabiliya Elementary Girl’s School, which the United Nations Relief and Works Agency had been using as a bomb shelter, was shelled by Israeli tanks- despite seventeen warnings from the UNRWA to the Israeli Defence Forces. On August 3rd, Israeli Defence Forces again shelled a UN shelter in Rafah, killing 10 Palestinians. War crimes are being committed on a daily basis by the Israeli military and urgent international solidarity is needed to hold Israel to account.

Response of the ruling class in Canada

The response from the ruling class, the 1%, in Canada has been predictable. The ruling Conservatives and opposition Liberals, big business and corporate media have publicly supported Israeli war crimes against the people of Palestine. This includes horrific silence and lies around the Israeli bombing of the United Nations school. This is not surprising. The ruling class in Canada, like the ruling class in the United States and Europe, has continued their imperialist and colonial policies in the Middle East. The occupation of Palestine is part of a broader strategy to secure Western interests in the Middle East, including access to oil and markets. Capitalist imperialism will stop of nothing short of the total elimination of the Palestinian people in its quest for ever growing profits.

Much like was done in Canada to the indigenous population, the Palestinians are systematically forced into smaller areas of land to accommodate the expansion of settler villages. A full 59% of the West Bank is under exclusive Israeli control, and any movement through the remainder of the non-continuous Palestinian territory is disrupted by 522 security checkpoints. Such limits do not apply to Israeli settlers, who travel between the 130 illegal settlements on Israeli-only roads. Meanwhile, the Israeli government is near completion of a 700 km-long separation wall (longer than the border) to contain the Palestinians and annex West Bank land. As Canadians that know the tragic history of colonialism in North America, we are obligated to act to prevent history from repeating itself.

Response of the NDP

Solidarity Halifax is disappointed in NDP Members of Parliament in the Halifax Regional Municipality, and across the country, for their lack of comment and action against the Israeli invasion of Gaza. As proclaimed progressive and left-wing political party, the NDP is supposed to stand for international human rights, justice and against war. To date, the Conservative government has been Israel’s biggest cheerleader and the Liberal party has been singing backup in their uncritical support for Israel. The New Democrats have called for a ceasefire and expressed concern at Palestinian casualties. However, they have stopped short of naming, let alone condemning, Israeli aggression. This is not adequate.

When Israeli tanks shelled the UN shelter in Gaza, the UNRWA and even United States condemned Israel’s actions. Stephen Harper, however, has lied to the Canadian people and repeated the Israeli line that Hamas bombed the shelter. The NDP Official Opposition must condemn Israel’s warmongering in forceful terms. The Conservative government’s support for these policies must be equally condemned.

The NDP membership has been frustrated by the party’s silence towards Israeli aggression. NDP members have dissented against this silence, including a one-day occupation of Foreign Affairs Critic Paul Dewar’s office and a statement from the New Democratic Youth of Canada.

Solidarity Halifax, along with other groups including Independent Jewish Voices, Canadians Arabs and Jews for a Just Peace, and Students Against Israeli Apartheid, agrees that the NDP must do more, and so has organized a picket at Megan Leslie’s office. Megan Leslie is the NDP Member of Parliament for Halifax and deputy leader of the federal NDP. We call on the NDP to:

As Solidarity Halifax has noted in the past, electoral politics can never bring about deep change in society. Change must come from below, from the working classes and oppressed peoples of Canada and around the world mobilizing in defence of our rights, lives and livelihoods. This does not however make electoral politics unimportant. Electoral politics must be viewed as a tactic, a means to an end, not and end in and of itself.

Years ago, in response to Apartheid in South Africa, it took mobilizations and support from people around the world to help bring down a racist regime and force our politicians to take action. The ruling class of Canada, the United States and Britain continued to support Apartheid South Africa for decades and opposed the African National Congress under the revolutionary leadership of Nelson Mandela, often calling him a terrorist. Trade unions, student unions, women’s organizations, anti-racist and immigrant groups organized to demonstrate the people of the world were opposed to Apartheid. This international support helped people on the ground in South Africa fight back against Apartheid. That is our challenge today when faced with what Mandela and Archbishop Desmond Tutu (among many others) have called Israeli Apartheid.

In international solidarity work, it is our goal to hold Israel accountable for its crimes and to support the calls from Palestinian civil society. We must bring international attention to the plight of the Palestinians. We must challenge false narratives, such as the notion that Israel is somehow defending itself from territory it occupies, or the naive liberal idea that all sides are equally to blame. Political parties are a sensible target for solidarity activists because they have access to a significant public platform and what they do with it makes the difference for Palestinians. To have power and not use it is as much a political act as using it.

Stephen Harper’s Conservatives and Justin Trudeau’s Liberals must be challenged for their shameful, uncritical support for Israel’s latest war and, since the Conservatives form the government, warrant much attention from Palestine solidarity campaigning. However, calling attention to the NDP’s silence on Palestine is important as well. Some New Democrats, even those that support the Palestinian cause, believe that efforts to move the party’s position on Palestine is inappropriate. However, recent events suggest otherwise. We do not believe it is a coincidence that the first reference by Paul Dewar of any Israeli aggression happened a day after his office was occupied: grassroots pressure works and must be maintained. Further, when no parliamentarians are using their considerable public profile to speak up for Gazans, activists should target those most likely to be swayed: in this case, the Official Opposition. The more often condemnation of Israel’s bombing of UN schools is in the news, the better. If grassroots action is required to make the NDP use their platform to carry these messages, then action shall be taken.

Israel’s continued occupation of Gaza and the West Bank, as well as the economic blockade, are crimes against humanity. Solidarity Halifax calls on all progressive forces in Canada to act in solidarity with our sisters and brothers in occupied Palestine and to commit to a just peace in the Middle East. 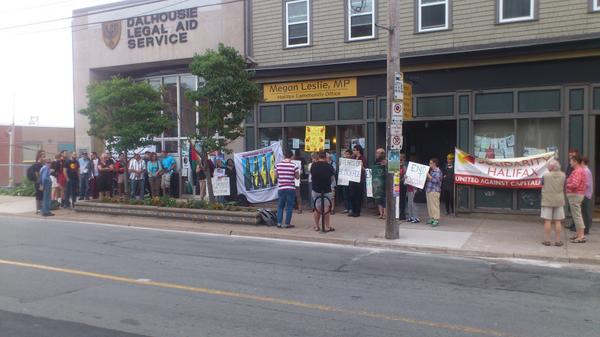 Picket outside of MP Megan Leslie’s office on August 5, 2014 to demand that the NDP condemn Israeli aggression. The event was organized by Solidarity Halifax, Independent Jewish Voices, and Canadians, Arabs and Jews for a Just Peace.

One Response to “Support the People of Gaza: An Analysis by Solidarity Halifax”