Analysis » Why are we #IdleNoMore?

Speech delivered by Sébastien Labelle on January 10, 2013 at the ‘Why Are We #IdleNoMore?’ teach-in on behalf of Solidarity Halifax. Video available HERE. 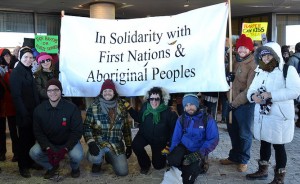 Solidarity Halifax members participating in the Trail of Fire march of January 27, 2013.

First, I’d like to explain why Solidarity Halifax supports Idle No More. We support Idle No More because it is an expression of rage, an act of defiance – expressed in many ways – against yet another example in the Canadian state’s long legacy of colonialism, arrogance and paternalism toward the Indigenous peoples of Canada. Idle No More is a rightful stand against the degradation of the territorial rights of Indigenous peoples, against the latest attempt to privatize reserve lands and all commonly held territories, and against the latest example in a long history of efforts to force Indigenous peoples to assimilate into a system of private property, wage labour and profit accumulation.

Idle No More is a categorical “NO” to eight legislative bills directly affecting Indigenous peoples, all of which were introduced without consultation and after a public declaration that no changes would be made to the Indian Act. Idle No More is a condemnation of the Canadian government’s continued refusal to recognize the rights of sovereignty of First Nations and Aboriginal peoples or to collaborate with those peoples on a nation to nation basis through the respect of the Treaties signed between Indigenous peoples and the British Crown; and later ratified through the Canadian constitution. Idle No More is a movement that not only denounces attacks against the rights of Indigenous peoples, but also denounces attacks against union members, migrants, and everyone depending on the life sustaining ecology of our planet. Finally, it is also a movement that challenges the structures in the very communities within which it originates – it is an empowering example of self-organization, at the grassroots level, propelled by a young generation of courageous women deserving our heartfelt thanks for the work done so far, and the work to come.

Many of us are gathered here today because we see common ground in a fight against the Harper government and the omnibus bills – and this common ground is important and must serve to give us strength and the ability to work toward a common goal. However, two things must be considered in this effort:

First, we must be careful of blurring out white or settler privilege in calls for unity and recognize how, while we are all affected, we are affected in different ways and to different extents. Finding common ground has to come with considerations of different circumstances. The most unifying point of concern with bill C-45 is the removal of legislative protection of our natural environment. And that’s no surprise: we all need clean air to breathe, clean water to drink and clean soil out of which to grow our food. But in that analysis, we need to recognize that Fist Nation and Aboriginal communities will feel the effects much more than others. These communities depend much more than most on the direct use of the natural resources that surround them in order to sustain themselves; also, polluting extractive industries and waste sites are located much nearer to these communities, and in greater numbers than to other communities. There is also common ground found here in the opposition to Stephen Harper’s disdain for democracy. However, it is important to consider that while Stephen Harper denies a democratic voice to those he claims to represent as Prime Minister of the Canadian state, he outright denies national recognition and rights of sovereignty to the Indigenous peoples of this land, which the Canadian constitution affirms they have as per treaties signed. What is also very important to consider is that First Nation and Aboriginal communities have had to endure and suffer through centuries of attempts at genocide, assimilation and forced poverty. The consequences of this are very apparent in statistics of health indicators, imprisonment and education. In other words: while we stand together, the fields of struggle and the stakes before us are uneven – and those of us at a different and more privileged place need to recognize our advantages and take responsibility in understanding where they come from. We can’t say “this is a matter of the past and we can’t take responsibility.” On the contrary, we must take responsibility because this is part of the legacy which continues to shape Canada’s relationship with Indigenous peoples. If we refuse to take responsibility for the continuation of the oppression of Indigenous peoples, we cannot hope to fundamentally change the present to find true and honest reconciliation – regardless of what happens to Stephen Harper and bill C-45.

This brings me to my second point to keep in mind in creating common ground: that we need to consider the deeper structures out of which Harper and bill C-45 emerge. While we could remove Stephen Harper from office and repeal the legislative changes his government has made – and these would be tremendous victories with important concrete positive impacts on the lives of us all, it would not be enough. Because we would still be left with a colonial relationship between Indigenous peoples and the Canadian state. This would still leave us with an economy structured to concentrate wealth in the hands of a few, and where the sustainability of a perpetual drive for profit is given priority over the sustainability and health of our natural environment.

Let’s take a moment to examine very simply how our economy is structured. We need money and resources in order to produce something that, through a sale, will allow us to make more money. This additional money then allows us to produce more, and therefore acquire more money and resources and so on. This is the basic cyclic pattern, always expanding, which drives our economy. What I’d like to examine more closely in the context of Idle No More, is where the initial money and resources comes from to begin a capitalist cycle. If money and resources are needed to generate an initial production, then where does this initial capital come from? Today, if you were to start a business from the ground up, you would tap in to banks and investors who have already accumulated money and resources over the course of the existence of this economy. But before banks and investors had a chance to accumulate, at the very beginning of the capitalist economy, this money and these resources had to be gotten somehow – and this somehow is through theft and dispossession. In Europe, this happened through the appropriation of land previously commonly managed by peasants. On this continent, this happened through the colonial theft of the lands and resources previously used and considered a common good by the Indigenous peoples.

Forward back to today where levels of production and consumption have grown so much that the levels of accumulated capital (money and resources) are no longer sufficient to keep driving the economy. So what were seeing now are two things: one, the increasing dependence on debt (and even sales of debt) to keep these cycles going; and two, a whole new round of appropriation of start-up capital through the privatization of whatever is not already privatized – including commonly held reserve land. The privatization of this land is in and of itself a goal (dismantling remaining examples of commonly held land), but what’s even more attractive for those seeking capital is that the privatization of this land – along with the removal of environmental protection through bills like C-45 and free trade agreements – creates the conditions to privatize and transport vast amounts of natural resources like oil, wood, minerals and water to be sold for a continued expansion of the economy. These are resources which, whether on or off reserve, Indigenous peoples have a claim to. So if it is the economy that drives the continued erosion of territorial rights of the Indigenous peoples of this continent, when we’re talking about anti-colonialism today, are we not inherently talking about anti-capitalism? Can they be otherwise than one and the same in the struggle we face today?

My point of view comes from the fact that I am, and speak on behalf of an organization that is anti-capitalist. Well, what does that mean anyway? What this means is that we recognize and identify a common root cause for the many forms of oppression, division and inequality that exists in our society. Because our economy is structured to concentrate ownership and control of the means to produce goods and services, inevitably inequality in wealth and resources occurs and fosters divisions among human beings in order to justify inequality. So this is what we are against, and of course the question which is always thrown at someone who says they are anti-capitalist is: “well, what are you for?” I can’t pretend, and no one can expect of me – a single person, or a small organization in Halifax – to devise an entire plan for a new global society. It’s easy to point to capitalism, it’s all around us. But to point to something that isn’t there yet is much more difficult. And yet that isn’t a reason to not try to work it out collectively. Without doubt there is more to human potential than what we have now or what’s been tried already and we must give ourselves the opportunity to explore, discuss, experiment building relationships and structures of governance that give true democratic collective power to all those concerned.

What we’re seeing in Idle No More is a challenge to the status quo. The challenge is expressed in various ways and from varying points of view, but there remains a unifying “no” to the theft and polluting of land for profits that are not distributed evenly. And this challenge is being organized in ways where people are not depending on those claiming to be in charge, but rather taking things into their own hands. Now as the movement evolves, it is important for us to talk through our differences and ensure that our debates on strategies and analysis are constructive and that we don’t fall prey to the pressures of divisive tactics. This struggle, along with many of our other struggles, will create the conditions for us to imagine another world, and to create it together.

One Response to “Why are we #IdleNoMore?”