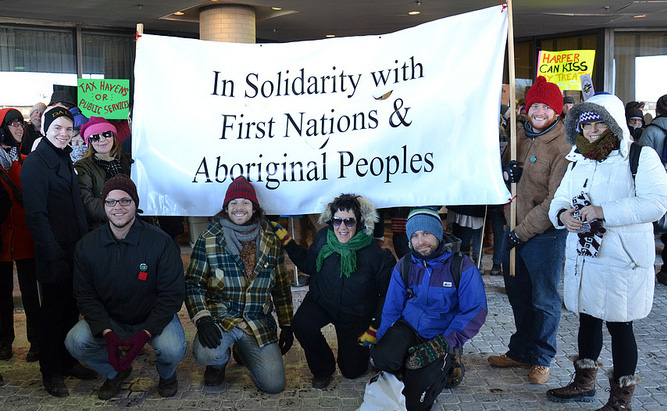 Since the emergence of the Idle No More movement, Solidarity Halifax has engaged in a sustained effort to provide support to the communities and organizers involved. In addition to answering calls for attendance and lending logistical support, Solidarity Halifax sees education within non-Indigenous/settler society as a primary objective in solidarity work. Taking responsibility for Canada’s colonial legacy, educating ourselves about the political and economic history that continues to shape relationships between Indigenous and non-Indigenous peoples, and fighting ignorance and racism within our own communities are necessary preconditions for a healthy and genuine reconciliation between all peoples.

Why Are We #IdleNoMore? teach-in presented by Solidarity Halifax on January 10, 2013. A crowd of over 450 people assembled to attend the event.

Why Are We #IdleNoMore? teach-in presented by Solidarity Halifax. Edited recording by CKDU 88.1 FM

Additional resources on Anti-Racism and White Privilege are available on our African Nova Scotia Solidarity page.