1. After a review by their head office in Toronto, Metcap Living Property Management has started declining tenants with bad credit scores. This comes after large rent increases; a one bedroom apartment in the notoriously bad Jackson Rd properties now starts at $680 plus power.

2. The Department of Community Services is refusing to provide damage deposits to people on social assistance for units with rents above $600 a month. The maximum shelter allowance they provide for a single person is $535 a month.

3. Minimum wage jobs are increasingly part time and temporary. Even with full time hours, a minimum wage worker would spend close to 50% of their monthly earnings on housing living in a Metcap property.

4. Metcap Living is the private sector housing of last resort, especially for people labelled “difficult to house” due to their mental illnesses, addictions and experience with being homeless. These are often people who have been criminalized, and generally are experiencing severe social exclusion.

5. Metcap Living is a slum landlord with a monopoly on low rent housing in Dartmouth North, the 500 block in Spryfield, and the Roleika Drive neighbourhood in East Dartmouth. In Nova Scotia and across the country, their corporate interests are tied to extracting maximum profit while investing as little as possible in maintenance.

6. Metcap Living is known nationally for deplorable conditions in their buildings, and have been the subject of media attention and organized actions due to severe, ongoing violations of the safety, dignity and rights of their tenants.

7. With Metcap Living gone as an option for the lowest waged and unemployed workers, Halifax is at risk of an intensified housing crisis. We are likely to see an increase in homelessness, and a growing numbers of low rent properties with even worse conditions than Metcap’s; such as the rooming house owned by Hasan Yildiz condemned by the city last fall.

8. The Halifax city government is responsible for enforcing decent conditions in rental properties, and have shown no interest in taking that role seriously. In their campaign to implement a municipal Landlord Licensing program, Nova Scotia ACORN has been told city staff are working on a report on improving standards enforcement. That report has yet to be released, despite assurances to tenant activists it would be forthcoming.

9. The city government is refusing to take leadership in affordability of housing in Halifax; perhaps not surprising considering Mayor Mike Savage and a number of councilors have their campaigns bankrolled in large part by landlords and real estate developers.

10. If Halifax is to avoid a housing crisis, swift intervention is needed. The government will do nothing to ensure housing affordability unless low wage workers, people on social assistance, unions and poor people’s groups organize and take bold action.

11. Capitalism treats housing as a commodity, to be bought, sold and rented in the interests of the 1%. As long as the provision of housing is a for-profit enterprise, there will be sizeable parts of the population who experience homelessness and housing insecurity. We need Landlord Licensing, Rent Control and zoning policy that ensures affordable housing but we need to start exploring more systems solutions, such as expropriating the properties of slum landlords to be run as public housing and taking development decisions out of the hands of private real estate developers and putting them to a participatory, democratic process. 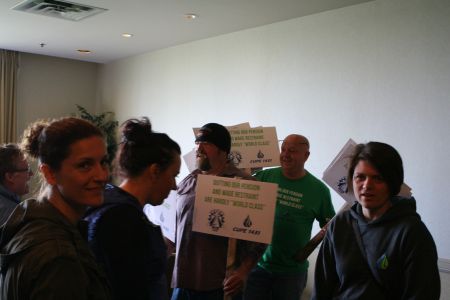 Talking Radical Radio interviews Folami Jones (Kwacha House Cafe), Matthew Byard (Ujamaa) and Ben Sichel (Solidarity Halifax) about the Working While Black in Nova Scotia project. It is a response to anti-Black racism in workplaces in the province, and it is organized around a website where people may anonymously share their experiences.

LISTEN TO THE INTERVIEW HERE

On April 7 2015, Solidarity Halifax member Kyla Sankey hosted a discussion on Venezuela’s National Liberation Struggle and Obama’s war in the Americas. Does this nation represent a threat, or a hope for peoples’ struggles across the world?