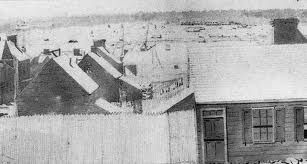 Homes in Birchtown, one of the first Black settlements in Nova Scotia following the American Revolution (Photo: Collections Canada).

It has been deeply saddening to learn about the allegations of abuse that have come from former residents of the Nova Scotia Home for Colored Children in recent months. They have resonated throughout the Black community as a whole.

Considering the historical context of race relations in this province, reading about this situation has also been extremely frustrating.

The fact is that White society in this province has treated the African Nova Scotian community with a damaging mixture of indifference, paternalism and contempt over its more-than-200-year history.

The earliest African Nova Scotian settlers, Black Loyalists who sided with Britain in the American Revolutionary War or Refugees who came after the War of 1812, were often deprived of promised land by colonial authorities when they came north, and sometimes even re-enslaved. The little land that was accorded was usually barren or swampy.

The demolition of Africville; the racial profiling of boxer Kirk Johnson; the refusal of the burial of a Black child in Windsor; the list goes on.

In response to the racism in this province, and as an act of independence and self-sufficiency, the Nova Scotia Home for Colored Children was conceived, built, funded and run by the Black community for African Nova Scotian children in need of care.

In 1921, when the Home was built, White home care institutions would not accept Black children in need. As Charles Saunders, author of a history of the home notes, this was not a case of the Black community wanting to create an institution that was “separate but equal” to White institutions.

This was, rather, a case of  “separate or nothing.”

Throughout the 1940s and 50s, the home was held in high regard by the Black and White communities alike, despite chronic underfunding. Among Black institutions, only the Church held higher status, Saunders writes.

By the 1960s, official segregation was ending both in Canada and the United States, and foster homes were replacing institutions as the preferred model for care of children in need. A sentiment that the “cure” for segregation was to integrate Black people and institutions into White ones – the same sentiment that led to the razing of Africville – began to be more common.

But racism still powerfully persisted in this province, and even as government social service agencies took many children from their families and put them in foster homes against their parents’ will (often because of poverty, not abuse or neglect) the home continued to assert its role as a place that understood what it meant to be a poor, Black child in Nova Scotia.

Looking at contemporary media can give us an idea of how mainstream White society looked down upon the Black community. A 1956 MacLean’s article entitled “Would You Change the Lives of These People?” described the Black community of New Road (now part of North Preston) in appalling, patronizing terms:

“[It] is almost as obscure and sinister as a village in an African jungle,” journalist Edna Staebler wrote. “The people have no skills and look for work as laborers in Halifax and Dartmouth … I saw some ragged pickaninnies eating the parings and cuttings of vegetables from a carton on the ground by the door.”

Staebler went on to say that residents had “queer superstitions,” since they did not like to be photographed.  In the cemetery “[o]nly one grave had a professionally cut stone, several had cement markers crudely chiseled with the N’s and S’s cut backwards.”

These are the racist stereotypes Whites too often constructed of Black Nova Scotians: helpless and illiterate, worthy only of pity or scorn – and when convenient, a source of cheap labour, in mines, on construction sites, and in the fields.

Is it any surprise that the Black community saw the need to maintain a place that was seen as safe for its most vulnerable children?

The Home for Colored Children was always revered within the Black community, an elder has told us.

It is also the only Black institution in Nova Scotia, besides the Baptist church, that owns a large amount of land.

When similar scandals have rocked institutions in the White community – the Shelburne School for Boys, the Nova Scotia School for Girls in Truro, the Mount Cashel Orphanage – it has not affected the entirety of the community in the same way.

It seems beyond doubt that the home was not a safe place for at least some of the residents there. Those alleged victims of abuse would have been doubly marginalized, in that they were part of a marginalized institution.

We express our solidarity with these alleged victims, as well as the entire African Nova Scotian community as it goes through a difficult process of healing.

Just as importantly, we also call upon White Nova Scotians to examine our own collective responsibility in the historic and continuing marginalization of the Home for Colored Children, its residents, its employees and African Nova Scotians.