By Kyle Buott, president of the Halifax and Dartmouth District Labour Council and a member of Solidarity Halifax. 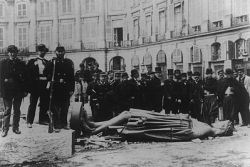 A statue of Napoleon toppled during the Paris Commune of 1871. (André Disdéri photo via Wikipedia)

People say Left and Right are no longer relevant terms in the new millennium.  They say we have moved beyond such simple identifications.

This is a right-wing argument that tries to disorient and trick people. Left and Right are terms just as meaningful today as when they were created.

Using the term “left-wing” to refer to people who are politically progressive and the term “right-wing” to refer to people who are politically conservative comes from the French Revolution in 1792.  Those who thought the revolution’s goals of democracy and ‘Liberty, Equality, Fraternity’ were being betrayed sat on the left side of the room, and those who wanted to restore the old regime sat on the right side.

Yet the concept goes back much further.

This is a history that dates back well over 2,000 years.  It is the history of the class struggle.  The history of the dreams and struggles of the working classes for a better world and the often violent repression used by the ruling class to crush those dreams.

The ruling class tries to erase our history. In schools they teach of kings and queens and ‘great men’ while ignoring the history of the majority of us. We forget this history at our peril.  “No root. No fruit.”

As radicals and progressives, when we remember our history, we are the Left.

Originally posted at the Halifax Media Coop on August 8, 2013.