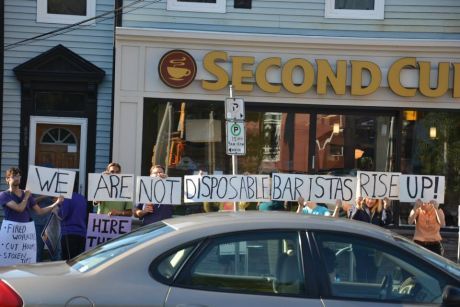 The union movement in Canada faces a number of challenges. Not only has the economic crisis given the excuse to employers and the state to rail on organized workers, but labour’s difficulties in successfully organizing in the service sector could lead to a continual fall in union density in the private sector—which spells trouble for the working class. So the question is: how can the union movement begin turn the tide and organize in the low wage service sector?

In the US we’ve seen the inventive and exciting organizing with the Fast Food Forward campaign—where workers in the biggest fast food chains are organizing to demand higher wages and unionization. Closer to home, the Baristas Rise Up campaign (which I had the good fortune to be a part of as a contract organizer) in Halifax, Nova Scotia is a modest attempt at organizing the low wage service sector.

Just Us café organizing
This spring and summer, coffee shop workers at several businesses in Halifax started to come together to transform the low wage, precarious work of baristas into something better by forming unions with the Service Employees International Union Local 2. This past spring, workers at a Just Us café, a fair trade workers co-op, attempted to organize a union. The workers were less than pleased about how this supposed workers’ co-op (only 15 of 70 or so workers were in the co-op), which prided itself on the mantra of fair trade and ethical practices, fell short when it came to treating its own workers with dignity. During the union drive, the employer fired two workers who were involved in the organizing.

Just Us workers began a period of public agitation, which culminated in the employer caving to public pressure and recognizing the union. The Just Us workers at the Spring Garden cafe are now in the process of negotiating their first contract. The other Just Us locations in Halifax will also be granted card check neutrality.

After this victory it was quickly recognized that a single unionized coffee shop was by itself not going to achieve gains at the bargaining table. Also, because of the high turnover in the industry it was quite possible that the union would not be sustainable over the long-term in a non-organized sector. So, it became necessary to think about how to organize the entire coffee shop sector in order to transform it.

Baristas Rise Up
The BRU campaign, which is a worker led effort, was launched as workers from two other Second Cup stores organized union certification votes. At least one of those stores won their vote; the other vote count is pending. However, these victories came at a price. At one Second Cup, the owner fired four workers and cut the hours of the rest after finding out about the union drive. The workers in BRU held multiple rallies and pickets outside the store to show that they weren’t intimidated and that they weren’t going away.

BRU is currently looking to expand its organizing campaign with a coordinated drive in other coffee shops. However, this is not an easy task. The high turnover, the lack of union tradition, the small workplaces and the virulent anti-union climate of small businesses present unique hurdles in an organizing drive. Organizing a small workplace with an ever-present owner or manager who has developed personal relations with the employees makes it harder for workers, even if they have multiple complaints about their work, to cut through the small business ideology of “we are all in this together.” The hands-on nature of small business owners makes them particularly anti-union.

Baristas in Halifax are for the most part young, but unemployment Nova Scotia hits young workers especially hard. Nova Scotia’s unemployment rate of nine percent, which is well above the Canadian average, swells to over 18 percent for workers under 25. This disadvantages young workers and means that so called “transitional jobs” such as coffee shop work are fast becoming the permanent new normal for young workers.

Lessons
The explosion in public interest across Halifax and the rest of the country about the coffee shop workers’ union drive speaks to the potentials and problems facing unions. The union movement must figure out ways to effectively organize in the low wage service sector to remain a vibrant and relevant force for the working class. This means modest campaigns such as BRU should be replicated on a grander scale across the country.

If we are truly to win substantial gains for the working class we not only have to unionize individual workplaces, but we need to aim in the long-term to transform precarious low wage service jobs into something better. This requires having a strategy to increase density and moving to implement city-wide base contracts to under-cut the competitive pressure on labour costs used by capital. The only way this can happen is for unions to pour resources into these types of long-term union drives and for the rank and file to ensure that these campaigns remain worker led.

Originally published at Socialist.ca. Dave Bush is a member of Solidarity Halifax and a co-editor of Rankandfile.ca

Photos of solidarity pickets for barristas fighting for unionization at Just Us! and Second Cup locations.

A panel discussion exploring the particular problems facing students and young workers in Nova Scotia and creative strategies and tactics for fighting back.

Presented by Baristas Rise Up in conjunction with the Canadian Federation of Students-Nova Scotia.