Article by Ben Sichel originally published by the Halifax Media Coop on October 3, 2013. Ben teaches in Dartmouth and is a member of Solidarity Halifax. 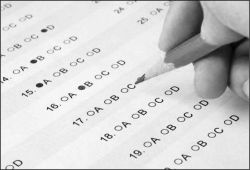 With just a few days to go in the provincial election campaign, there are a few things that should be said about P-12 education.

The Liberals have set the tone of the debate on education in this campaign, and they look likely to form the next government. So, let’s give their platform a bit more scrutiny.

Anyone paying attention knows that teachers are mad at the NDP. Early in its mandate the Dexter government made large cuts to school board budgets, angering both educators and parents. While some rural schools with tiny classes occasionally made the news as symptoms of declining enrolment, some schools in HRM were bursting at the seams with elementary classes of up to 29 students. (That’s a lot of 5-year-olds in a room with one adult.)

The Liberals stepped in and seized upon the mass discontent, promising to put $65 million into the public school system in order to hire more teachers and other educational workers, and launch a “comprehensive review” of the Nova Scotia curriculum, which they say hasn’t been done in 25 years. Class sizes in grades primary to 2 would be capped at 20 students under their plan, and at 25 students in grades 3 to 6. This compares to the NDP’s plan of capping class sizes at 25 for all grades from primary to 6 (P-3 classes are already capped at 25).

A few words on class sizes: the Chronicle-Herald reported that the average elementary class size in Nova Scotia in 2011-12 was 21.6 students, well below the mandated cap. However, it’s worth noting that average class size can be a relatively meaningless statistic. Class sizes vary quite a bit between rural, urban and suburban areas, and a small class in a rural area (of which it would appear there are many) does nothing to ease the burden of a large class in the city.

As well, there are some educational “experts,” such as Paul Bennett, an Atlantic Institute of Market Studies fellow and former private school headmaster quoted in the Herald article above, who love to claim that class sizes don’t matter anyway, since some studies apparently show that smaller classes don’t actually help children learn. Bennett says talking small class sizes is good politics, but bad policy.

This argument is drivel, since these studies take standardized test scores as their measure of classroom “success” and assume that all that matters in a child’s school experience is this test score. In real life, teachers have to be on the lookout for cyberbullying, harassment and intimidation, racism, sexism, homophobia, mental health issues, and much more, in addition to creating dynamic, effective lessons and assessments that cater to a variety of learning styles. This isn’t a complaint about all that teachers have to do – we want students to be safe and happy in school. But basic arithmetic tells us that larger class sizes make it harder to pay attention to individual students’ needs.

All this to say that small elementary class sizes, proposed by all three major parties with the Liberals’ cap being the lowest, are a good idea. Assuming these promises are kept (I know, I know), they could provide some much-needed relief for over-burdened teachers and neglected students.

Anyone hoping for deeper educational improvements under the Liberals, though, will almost surely be disappointed. To start, most Nova Scotians go to school beyond grade 6. There’s no mention of class caps for grades 7 to 12, even though several high schools in HRM this year are reporting classes of 35-40 students.

(Lest a casual observer think that teaching this many students is easier because they’re older, I’d invite them to come to my school and try teaching that many teenagers for a few days, then report back to me.)

Perhaps even more worrisome, however, is the Liberals’ vague talk of “curriculum review.”

First off, the party’s presentation of the issue is entirely misleading, giving the impression that Nova Scotia schools are still teaching exactly the same thing they did in 1988. I heard Liberal candidate Patricia Arab, a teacher, say this in the Fairview-Clayton Park candidates’ debate, even though she would know that curriculum documents are constantly changing; as a case in point the African Canadian Studies 11 course didn’t exist in 1988 and got a brand new curriculum in 2009, and the NDP’s much-touted full-year grade 10 math curriculum just took effect this year.

Claiming that the curriculum hasn’t changed in 25 years – ostensibly something quite different from not having had a “comprehensive review” – is disingenuous and just plain bizarre.

Second, according to the Liberal platform the review would be led by a “Blue Ribbon [sic] panel of experts” and focus on “aligning the needs of our economy with the skills of our students” as well as “[l]iteracy, numeracy, and creative thinking.”

I’ve had no luck so far in trying to find out who exactly would be on this Blue Ribbon panel, but given the track record of “experts” who want to align curriculum content with “the needs of our economy,” it might be time to start to worry.

The language used here is that of the corporate-driven education “reform” sweeping across the U.S., and making inroads in Canada. In this line of thinking, standardized tests are the best measure of a school’s effectiveness, and results are compared across schools and jurisdictions. Teacher autonomy is reduced, and non-testable subjects such as music, art or phys ed are de-prioritized.

Basic literacy and numeracy skills become the only focus of education (saying you want to improve literacy and numeracy is politically similar to saying you want to lower taxes), teachers are de-professionalized, and their unions demonized. Schools are constantly said to be in crisis, even if their standardized test scores rise or stay the same. (See this report which shows that Nova Scotia’s scores barely budged between recent testing periods.) You can read much more about these topics from authors such as Drs. Diane Ravitch and Lois Weiner.

Meeting the supposed needs of the economy – educating students to be functionally literate and numerate, and not much else – is a hallmark of corporate education reform. But it leaves obvious gaps in what might be considered a healthy, complete educational program. Take social studies, for example: in every election for the past 20 years, pundits have decried the steep, steady decline in voter turnout. Yet there is no talk of improving students’ historical and political education in education platforms. I teach Mi’kmaq Studies 10, where students learn about Aboriginal history and current issues, which I hope one day will help Canada mend its abusive relationship toward Aboriginal peoples. Is this a priority in a curriculum review process which aims to ‘meet the needs of the economy’?

And, would the money spent on a complete curriculum overhaul be better directed toward class size relief in higher grades?

I admit I could be wrong about what the Liberals mean by curriculum review, and if they’re elected I’d love to be proved wrong.

However, it seems that the world of education’s obsession with data, driven by the needs of big business, is going nowhere fast – and worth noting is that neither the NDP’s nor the PCs’ platform on education is much better.

The education system is part of a society which has allowed a tiny minority to gradually accumulate vast amounts of wealth at the expense of everyone else while destroying the natural environment, yet public education focuses more and more on preparing kids to become cogs in the great machine. No matter who is elected in Nova Scotia next week, on October 9th teachers, parents and students should follow the excellent example of the Chicago Teachers Union and start fighting for a real education. I hope to write more about this in coming months.