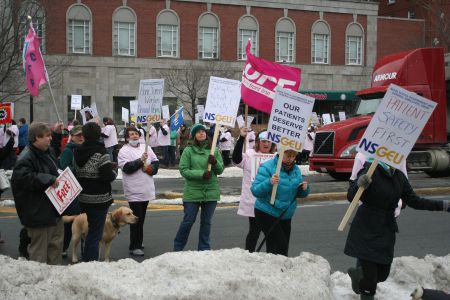 Last July, the opposition Liberals challenged the NDP government’s strike ban against ambulance workers; if anything, this piece of legislation is even more cynical and Machiavellian than that.

Bill 37 is a sly attempt to achieve two things:

So at one & the same time, it cuts the unions off at the knees AND offers no fair way to resolve disrupted negotiations, as prescribed by numerous international conventions to which Canada is signatory.

Several years ago, Judy Haiven & I wrote a monograph entitled: Health care strikes: pulling the red cord. In it, we argue that the techniques of Japanese lean production had been imported into North American industry, into public services and into health care. If you doubt, it just take a look at the plans to transform health care in Saskatchewan (http://www.health.gov.sk.ca/lean-introduction).

At least the classical Ohno model gives workers the power to warn if the system is faltering by pulling a yellow cord. And if it becomes dysfunctional workers can stop the production line by pulling a red cord.

But there’s no red cord provided in health services. Except for the right to strike. The threat of a strike is one of the only ways employees have of voicing that something`s wrong with a system running lean and running all over them.

And now the government wants to take that away that voice, except perhaps for the few hours you have to listen at Law Amendments.

We have also written A Tale of Two Provinces, where we compare strike activity, in the twenty-five years from 1983, in Nova Scotia and Alberta. Alberta, where strikes were ILLEGAL, had over fifteen times as many person-days lost to strikes, as Nova Scotia, where strikes were NOT ILLEGAL (after correcting for the size of the provinces.)

Practically everybody and ALL politicians say they believe in collective bargaining. It’s like democracy and motherhood and the tooth fairy.

But collective bargaining is a fragile thing

It works only when effective sanctions are available– it DOESN’T work when big brother puts his finger on the scale. And when workers are given no hope, they will engage in civil disobedience. Law abiding citizens one day and criminals (or at least miscreants) the next?

We’ve been studying labour relations in public services, for 40 years and we’ve seen it happen too many times. Government sends a signal that it will intervene in a dispute and the employer simply stops negotiating – on substantive issues to amend the collective agreement AND on a minimum services agreement.

Why negotiate with the union on minimum levels of service when you can get some third party to decide what’s essential?

I want to tell you a story. In April 2007, the allied health professionals’ bargaining unit at IWK in this same union (NSGEU) went on strike

By the time union hit the bricks, it and the hospital had negotiated VOLUNTARILY, without external compulsion, a comprehensive emergency services agreement, AND they had a backup arbitrator, again voluntarily chosen, to deal with emergent disputes and local details; and the union, almost all health care unions do it every time they negotiate. Without legal compulsion

Everybody in health care administration and everybody in government knows this is the case, that this and other health care unions provide good emergency services; much too generous in my opinion; unions, especially those of professionals and para-professionals have everything to gain from protecting patients, clients and the public and much to lose from failing to do so. But they must also have some bargaining power. And this bill deprives them of that.

The current dispute over nurse-patient ratios between Capital Health and the NSGEU nurses is not new. The issue is not even isolated to nurses.

The issue has been around at least forty years as the growing ranks of professionalized workers, especially those in public service, resist lean production and the threat to their professional autonomy and discretion.

Technologists, teachers, professors, scientists, social workers and even lawyers (remember that Nova Scotia Crown Attorneys went on strike illegally in 1998) – those with some bargaining power, have been wrestling with politicians, employers and government bureaucrats over the future of public programs and against austerity mania.

As for nurses, the “angels of mercy” who minister to us when we are ill, they are becoming class warriors. And we should all take pause to consider why.

Note: Articles and statements by Solidarity Halifax members do not necessarily reflect positions held by the organization.