Artist and Solidarity Halifax member Emily Davidson shares her thoughts on the importance of the Khyber in our community. Originally posted at the Halifax Media Coop. 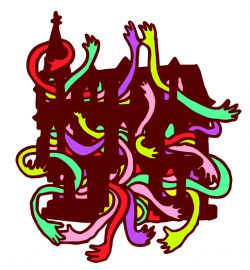 The Khyber can breathe life back into Halifax’s downtown. [Ilustration by author]

I’ve made out in the Khyber.

I’ve found my community at the Khyber.

The Khyber is a space that occupies the intersections between arts, music and queer communities. Words like hub or “cultural incubator” don’t sum up these intersections for me. Home is the only word that comes close. I am a person whose identity is matched quite perfectly to this intersection of art, politics, queerness and music. I see myself and my comrades reflected in the space. I’ve grown up in the Khyber and it has grown with me.

There’s something about the physical space of the Khyber that is irreplaceable.

Is it the echoes of the radical history of the building?

Is it the fact that they just don’t make buildings that beautiful anymore?

When the Khyber building was home to projects such as the Alternate Bookstore, the Turret Club, Wormwood Cinema, Echo Chambers recording studio, the Atlantic Filmmakers Coop, the Heritage Trust, the Khyber Arts Society and the Carbon Arc, it was a space for people to share resources, share ideas and build community. These projects have overlapped, co-existed and grown out of each other.

The history of the Khyber building is the history of people doing-it-themselves–people making space for their communities with the best of their abilities and resources. Part of the reason that I am so inspired by the history of the Turret Club (which operated between 1977 and 1983) is because it was a ‘community-run’ gay and lesbian social space.

It wasn’t the first gay bar in Atlantic Canada, but it was the only gay bar of its kind at the time: a social space run for and by members of the gay and lesbian community. The Turret used discos to fund the political work of the Gay Alliance for Equality (GAE), simultaneously creating a venue for political work, meetings, film screenings, cabarets and other vital points of contact for the queer community.

This do-it-yourself history runs strong in the veins of the Khyber Arts Society. The Khyber, as we know it, has seen more than its fair share of turmoil. There have been times when the relationship with the city-as-landlord has made running the Khyber unmanageable.

There have been times when the city closed access to parts of the building and there has been a seemingly endless train of consultation processes and empty political promises. Thankfully the plucky folks running the Khyber Arts Society keep picking themselves up, dusting themselves off and continuing to provide space for artists and musicians to come together, grow and thrive.

As I write this, community members are preparing for a public meeting on Sept. 4 to show support for saving the Khyber building. On Sept. 9, Halifax Regional Council will decide the fate of the Khyber building. If there is a silver lining, it’s that public ownership means we get to protest, sign petitions and speak truth to power when we are evicted and our building is put on the chopping block.

Regardless of the decision on Sept. 9, we need to keep fighting.

Our demands are far-reaching. Our dreams extend beyond reinstating the Khyber Arts Society into a status-quo, adversarial, head-butting relationship with the city-as-landlord. We want to see the city recognize the significance of this building and treat us, the arts, and the queer community, with the respect we deserve.

We want the city to renovate the building to have barrier-free access, and prioritize gender-neutral single stall washrooms (the kind they recently removed and replaced with a janitor’s closet), so that all types of people can feel safe in and enjoy this public space.

We want the city to follow through on their numerous commitments to having an amazing mixed-use, multi-genre cultural space downtown.

We want the city to let the space be used to its fullest potential.

We want the city to negotiate in good faith with the Khyber Arts Society and other arts as well as queer groups to shape future of the building.

We want to see the city take this opportunity to breathe some life back into the downtown instead of crushing community groups to continue lining the pockets of developers.

We want to see the city trust us to make this space for ourselves, knowing that we can build what our communities need.