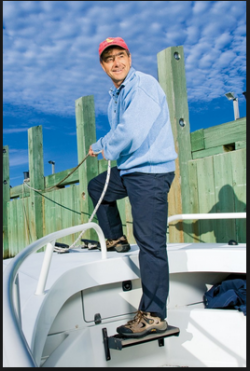 Billionaire fishmonger John Risley is all for provincial government handouts, when he gets them. [Photo: canadianbusiness.com]

Yesterday, John Risley came out in support of the Liberals’ cuts to the arts in the form of the Film Tax Credit. John Risley is the owner of Clearwater Seafood and a member of one of the four richest families in Nova Scotia.

There are four billionaire families in this province: the Sobeys, the Braggs, the Jodreys, and the Risleys. These families constitute the very top of the 1% in Nova Scotia. Each of them has a business empire in our province, and combined they own major stakes in grocery stores, frozen food, vegetables, blueberries, telecommunications, forestry, investment portfolios, paper products, commercial and residential property, hotels, catering, restaurants, health care, recycling, pharmacies, shopping malls, gas stations, convenience stores, food supplements, fisheries, lobster, and much more.

The portion of the Film Tax Credit the Liberals are planning to cut is a wage support for artists. As a result of this wage support, the film industry hires artists at a decent wage. Film workers also have one of the highest levels of unionization in the private sector through unions of actors, film technicians, musicians and directors (ACTRA, IATSE, CFM, and the Director’s Guild).

If cuts to the Film Tax Credit go through, this will lead to very little filming being done in Nova Scotia, and the filming left will offer increasingly precarious work with low wages and few benefits.

Of course, Risley’s support for cuts to funding for arts and culture, specifically cultural workers’ wages, is not surprising. What is surprising is that he made those comments publicly because he has personally benefited from government tax credits for himself and his businesses.

The 1% always support cutting funding to social programmes like health, education, and the arts. This is because they have been pushing governments for the past 40 years to cut taxes on the rich and corporations, and public spending on social programmes requires those tax revenues. For decades, the 1% have been very successful, behind closed doors, in convincing governments to cut their taxes.

Our province is not broke and the debt is not out of control. We are not Greece. We are not Detroit. Our economy today produces three times as much wealth as it did in the 1970s. The problem is that the vast majority of us have not seen any of that wealth in our pockets. Instead it has gone into the pockets of the 1%. People like John Risley.

Instead of cutting the Film Tax Credit, we should raise taxes on the rich and large corporations. This would allow us to fund health care, education, social assistance, environmental programmes, culture, and more.

There is plenty of money in Nova Scotia, and across the country. The problem is that this money, produced by our work, only benefits a tiny number of people.

Sebastien Labelle is Vice President of Culture and Mayworks at the Halifax-Dartmouth & District Labour Council and a member of ACTRA.

Kyle Buott is the President of the Halifax-Dartmouth & District Labour Council and a member of UNIFOR.